VANCOUVER, BC – Goldex Resources Corporation (TSX VENTURE: GDX, Frankfurt: WKN-A2AEDT, Ticker: G6T2) (“Goldex” or the “Company”) is pleased to announce results from a recently completed sampling programme at its Korokoro project in Mali. Goldex contracted Momentum Group of London to complete a site visit and review including sampling of existing pits operated by the Company’s JV partners RexMetal SARL and GeoSysTech SARL, sampling of artisanal workings and regional exploration. Best results from this programme include vertical channel samples from within the saprolite zone:

Chuck Ross commented “these initial sample results are highly encouraging and highlight the significant gold mineralisation that exists within the saprolite and laterite that forms a 15-30m thick horizontal zone above altered granites and metasediments. A grab sample of fresh granodiorite from an artisanal mining shaft with rare sulphides and quartz veinlets assayed 26.4g/t Au. Goldex notes that this Grab sample, GDX_003, is from an artisanal mining shaft at a depth of around 20 m and may not necessarily be representative of the mineralization hosted on the property.”

Mineralisation at Korokoro is present in 3 forms:

• Primary gold mineralisation hosted within the granites or Birimian volcano-sedimentary units and associated with quartz-carbonate veins and shear zones related to one or more Eburnean deformation events. Examples of this type of deposit in southern Mali include:

These deposits are often classified as orogenic or mesothermal due to the moderate temperatures and pressures at which they form. Veins are often less than 2m in width but can be very extensive both laterally as well as vertically, swarms or stockworks of veins are very common.

• Laterite and saprolite secondary gold mineralisation resulting from the weathering and alteration of primary mineralisation with gold forming mushroom like enriched zones on one or more horizons. Strongly oxidised these deposits, often called supergene gold deposits, are characterised by the very red colour of the laterite and underlying yellow mottled zone. Lateritic or supergene deposits are often located directly above primary mineralisation that may or may not be economic in its own right. One of the most well know deposits with a significant lateritic or supergene component is the Plutonic gold mine in Western Australia.

• Alluvial gold deposits where the gold is either free or associated with angular fragments of quartz and sulphidic material, often intensely silicified, and within alluvial sands and gravel horizons. 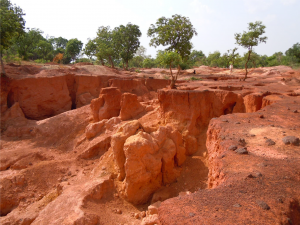 Photo 1. Example of small artisanal pit to a depth of 3-4m, spoil heaps in background are from small shafts that exist over the main area of interest and are believed to be up to 20m deep.

At Korokoro the most important type of mineralisation identified to date is the lateritic and supergene or saprolite gold present in the top 15-30m. Photo 1. 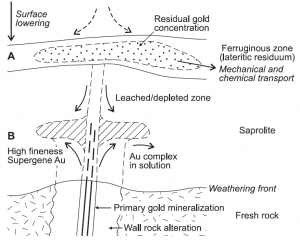 High grade primary gold mineralisation has been identified at Korokoro as illustrated by the result from sample GDX_003 and is associated with narrow quartz vein stockworks hosted by intensely silicified granodiorites and microdiorites.

Only minimal alluvial gold has been reported in the area, with most artisanal activity focused on the lateritic and supergene gold occurrences.

Figure 1 shows the relationship between primary mineralisation at depth and the overlying laterite and supergene gold mineralisation which management believes to best represent the deposit model for the Korokoro project.

Samples were collected at various locations representing the different geology and position within the regolith profile.  All necessary steps were taken to ensure appropriate sampling, preparation and storage techniques were taken, a full chain of custody was maintained throughout from the moment of collection to the handing over to the courier company.  No sample sieving, splitting or compositing was carried out.  A full description of the methods used to collect and ship the samples is:

Samples were analysed at ALS Laboratories in either Loughrea, Ireland (GDX_003 & 023) or Reno, Nevada.  At Nevada a screen fire assay analysis was used to ensure that all gold was accounted for, approximately 1kg of each sample was pulverised and screened to 100 microns.  A Duplicate 30g fire assay on the screen undersize, (-100microns) was completed along with a single fire assay of the entire oversize fraction, (+100microns).  Results were then combined for a final gold grade.

Mr. Andrew Dacey, MSc, R. P. Geo, a Qualified Person as defined under NI 43-101 regulations, has reviewed the technical information that forms the basis for portions of this news release, and has approved the disclosure herein. Mr. Dacey is independent of the Company as he is not an officer or shareholder. 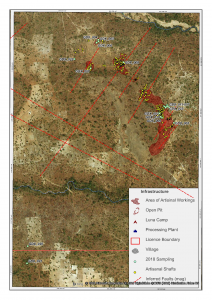